‘A Soul of the Holocaust’ 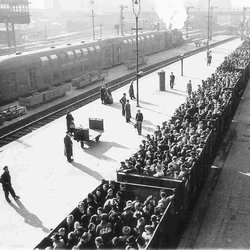 A client, who I will call William, came to me presenting with a deep fear of losing those closest to him. He had experienced this debilitating fear that influenced his close relationships for over fifty years.

William had in fact witnessed his younger brother dying and being revived when he was only five so this current life trauma played a part, but what we were to discover played an even bigger part of the mystery surrounding this fear that had been his prison for too long.

The first soul memory William accessed was as a young boy, aged 10, surrounded by bombed buildings and utter devastation, he was in Poland and Nazi Germany had invaded. As a young boy named Rueben he felt abandoned, alone and fearful. Separated from his family, he slept in the ruins of buildings with other children and an older girl, Eva, took care of him.

With overpowering anger and disbelief, Rueben watched people being marched onto trains as the guards laughed, without concern for their fate. In the next scene he saw his mother and ran towards her, but before he could reach her she was led through a door, the door of a gas chamber. He instantly knew he would never see her again.

By this stage he had witnessed his father being taken away, his brothers lost, presumably killed by the bombing and now his mother led to her fateful death before he could touch her one last time. He was overwhelmingly devastated.

Following this loss and in the years to come, Rueben went to Sweden with Eva. He got a job as a deck hand on an ocean liner that was going to America and with a heavy heart he said goodbye to Eva knowing he would never see her again even though they had planned to meet once more.

The ship never made it to America and Rueben died on this voyage. He had experienced a life of such considerable loss, heartache and pain, but at sea he felt calm and at peace. Moments before he died he felt a great sense of relief.

This particular past life clearly identified the origin of William’s fear and also revealed that Rueben and Eva had unfinished business as Eva reincarnated to be his wife in this life time (there is never a final goodbye). Once the root of the cause is identified it is then possible to start reprogramming ancient beliefs that lead to undesirable issues.

The messages from his soul, from his higher self, included to ‘trust everything is going to be ok’, ‘to let go and be free’, ‘to take back his power’.

During the session the body is encouraged to express and let go of shock and trauma and by the end William had released fear, guilt, grief, physical pain and other sensations such as numbness and heaviness in his body. By connecting an emotion with a past experience the transformative power of regression work leads to the healing of symptoms.

The release of blocked energy associated with a past life trauma is crucial to the healing process and William’s experience resulted in him feeling an immediate sense of freedom and relief. With additional cognitive tools, he has the power to make permanent changes to his thoughts and behaviours, bringing about a happier way of life and more fulfilling relationships with his loved ones.