'Love Rules, Not a Kingdom or an Empire' 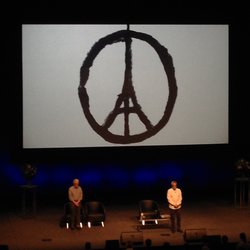 Day 2 of Dr Brian Weiss’ seminar on the weekend started with a moment’s silence in the wake of the senseless horror that had just unfolded in Paris. After some discussion he led the hundreds of people in the audience through another group regression.

Following guided relaxation and instruction to enter a past life, I immediately received an image of a woman, who I intuitively knew was me, standing on a rolling green hill, arms stretched wide, holding the hand of the man I had just married. As I focused on the details of the scene, I noticed the large castle behind us and that the uniform my husband was wearing was that of a king from Tudor times. Our love was undeniable and celebrated by the people gathered there. The messages were clear as my subconscious played out the scenes like a movie.

As a group we were instructed to go to the next significant event in that life and for me and my king, a baby was born. More love and bliss. For the purpose of this brief exercise we were instructed to leave that scene and go to the last day of that life time. I died of an illness and as I lay on my death bed I was surrounded by my loved ones and immersed in love. (It is important to note that with a one on one session significant events and scenes are explored in detail and much more thoroughly, with focus on the senses, sensations and emotional responses as well as a focus on identifying people from your current life.)

My king was someone who I instantly knew and recognised from this life, a soulmate and a member of my soul group, souls who you reincarnate with often to learn your most valuable lessons. The transference of this love and joy hasn’t left me since; it was incredibly powerful and healing. I’ve lost count of the past life regressions I have personally experienced, but I know that each one has created a shift within my energy and moved me into a greater place. Love is the strongest force and it is disturbing that there is so much hate in the world, but you can’t kill love, it never dies.

As my spirit left that sick body I had been inhabiting, I asked my higher self for a message...

‘Love rules, not a kingdom or an empire.’, my soul whispered.